Looking for the best mining motherboard in 2017? A simple enough question, but the answer isn’t as simple. Here’s a few reasons my answer could vary:

Once you’ve answered those questions, you can start looking for a motherboard.

For my build, I wanted to use a budget mining motherboard that allowed me to build a 7 gpu ethereum mining rig to get the most bang for my buck (the more GPUs you can connect to a single motherboard/cpu/harddrive/ram/power supply setup, the cheaper it is per GPU for your overall mining rig build cost).

I also wanted to use a modern 1151 CPU so I needed a motherboard that was compatible.

My needs brought me to find the Z170 style motherboard would be the best motherboard for mining ethereum. They use the Intel Z170 chipset with the LGA 1151 processor model socket. (tips for choosing the best cpu for mining can be found here)

MSI, Asus, Gigabyte, and ASRock all build motherboards that fit those criteria.

To make a long story short, the ASRock boards only support 5 GPUs, and the Gigabyte boards use PCIe 8x slots instead of PCIe 16x slots – not a big deal for mining, but if you want top resale dollars then it seems to be a less popular motherboard among gamers. That leaves the MSI and Asus motherboards in the showdown for the title of best mining motherboard for 2017.

The end decision was simple – one motherboard is way cheaper than the other. Not because it has lesser specs, but perhaps because one manufacturer has too much inventory, or they’re getting ready to release a new model and they’re selling off these? I’m not sure.

Here is your winner: 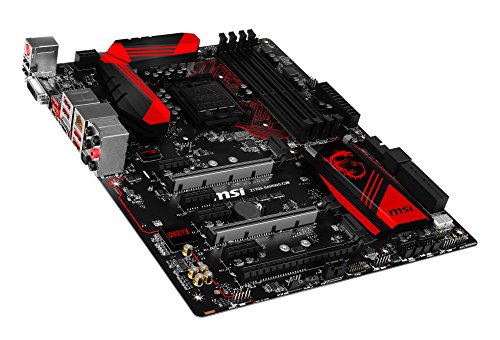 The Z170A M5 motherboard from MSI supports the 6th generation Intel Core processors. With 3x PCI-Express 3.0 x16 slots and 4x PCI-Express 3.0 x1 slots, this motherboard supports up to 7 GPUs to allow the most mining bang for your buck from a single rig. In the past the Z170A series motherboard has received negative reviews from miners because it had trouble running more than 4 cards – which was disappointing when trying to build a mining rig that produces top return-on-investment. However, with the new BIOS settings that the more recent boards are shipping with, and by using Windows 10, the problem has been fixed.