Every mining rig build starts from the ground – and the ground level for a computer is the motherboard. It’s the board that connects everything else together.

If you’ve built computers before, you need to change your mindset a little bit. Typically, specs you look for in a motherboard are things like speed, processor chipset, and things that affect the performance of your overall computer build. With a gpu mining motherboard, there are only a few factors that matter. 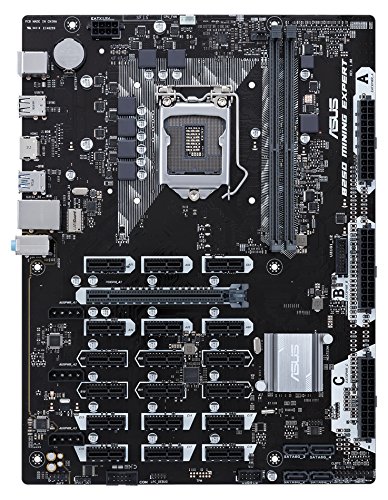 Check PriceWow, it was just a few months ago and people were excited to know that it was possible to connect 7 GPUs to a motherboard. Well, once again, ASUS has raised the bar! This motherboard has a massive 19 PCIe slots – so you can seriously connect 19 GPUs to this motherboard!

There are multiple power slots that allow you to power each bank of PCI slots with a separate power supply unit. Using the LGA1151 CPU chip type means this motherboard support 6th generation Intel processors.

There are a few caveats for connecting 19 GPUs – ASUS says that some need to be AMD and others need to be NVidia in order to get 19 of them recognized.

This is the best mining motherboard we’ve come across in 2017 – for about the same cost as other mining motherboards, this one allows over twice as many GPUs. Crazy! I can’t wait to get my hands on one of these for testing purposes.

The Biostar Mining motherboard has 6 slots ready to take your 6 GPUs. This motherboard supports the 6th generation Intel chips with the CPU socket LGA1151. This motherboard is a good choice since it has the newer CPU socket, it just doesn’t support the 7 GPUs that some of the other boards do. It does seem to be in stock more than the 7 GPU options.

The Asus PRIME Z270A motherboard supports up to 7 GPUs for mining, which makes it one of the top choices for building an ethereum mining rig. It supports the more current LGA1151 CPU socket for using the 6th generation Intel processors. It has 4x PCI-Express x1 slots and 3x PCI-Express x16 slots just like the Z170A from MSI. We’d recommend either one depending on price and availability. Right now they are pretty much the same price.

It seems like every motherboard manufacturer comes out with a competing product – strange I know! This one from Gigabyte takes on the Asus and MSI models head to head. It’s the same LGA1151 CPU socket that supports 6th generation Intel processors. And, the same as the competition, this board comes with 7 GPU slots ready to make a top-dollar-earning ethereum mining rig, although the configuration of the slots is different. Instead of having 3x PCI-Express 3.0 16x slots, it has one – and the other 2 slots are PCI-Express 3.0 x8 and PCI-Express 3.0 x4. It does have the same 4x PCI-Express 3.0 x1 slots as the Asus and MSI Z170A models.

The Z170A M5 motherboard from MSI supports the 6th generation Intel Core processors. With 3x PCI-Express 3.0 x16 slots and 4x PCI-Express 3.0 x1 slots, this motherboard supports up to 7 GPUs to allow the most mining bang for your buck from a single rig. In the past the Z170A series motherboard has received negative reviews from miners because it had trouble running more than 4 cards – which was disappointing when trying to build a mining rig that produces top return-on-investment. However, with the new BIOS settings that the more recent boards are shipping with, and by using Windows 10, the problem has been fixed.

The ASRock motherboard is another good choice, from a different manufacturer. It’s an older board, it supports the 4th generation Intel chip. Also, it supports 6 GPUs while some of the newer boards can support 7.