If you’re serious about building a mining rig, then chances are you’ve spent a large chunk of change on some of the top rated GPUs for your Ethereum Mining Rig. And if that’s true, you didn’t come all this way to have your precious GPUs overheat inside your mining rig!

Don’t fret – there is a simple solution. You just need to space your cards apart and give them some air to breathe. Get them up away from the warm (and air-blocking) motherboard, up into the open airspace where their fans can pull in a cool refreshing blast of air from your (likely) dingy basement [okay maybe that’s just me].

A USB riser gives you the ability to do 2 important things:

You’ll have to figure out a few things before choosing some riser cables. Consider these things when deciding what and how many riser cables you’ll need for your mining machine: 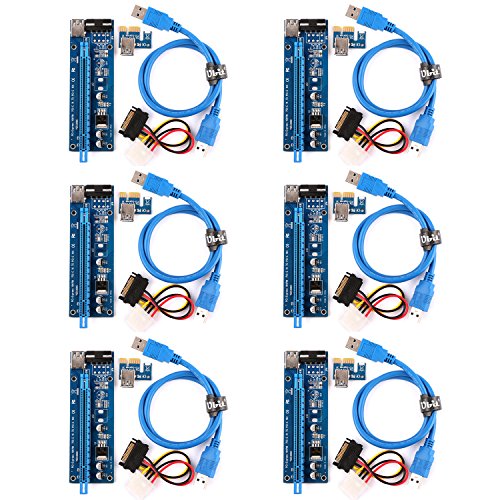 Check PriceThe VER 006C riser kits are just what you need if you’re building an ethereum or other GPU mining rig. Whether a small open air or large rack-based mining setup, this will provide you with what you need to connect multiple GPUs to your rig’s mining motherboard. The power is supplied through a MOLEX 4 pin connector on the riser card, which allows you to bring power directly from your PSU to the riser card thus lowering the power burden on your motherboard.

The ethereum mining riser cards come with 4 high quality capacitors, which they say makes it more reliable and a better choice than some of the competitors that only have 3 capacitors per card.

The board has 3 holes for securing it to your case, and effectively connects your PCI-e 16x mining GPU to a PCI-e 1x slot on your motherboard without affecting mining speed.

These usb risers are much cheaper than some of the other options, and these are the ones I decided to go with. Some purchasers claim to have received some dead-on-arrival risers, but all of the recent reviews are good so I decided to give them a chance and save almost 30% over some of the units from bigger name brands in the space. 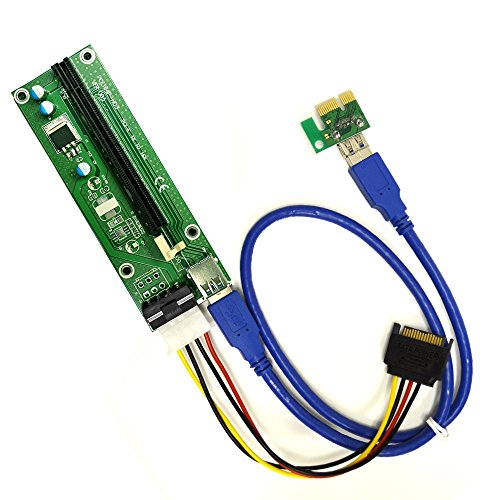 If you don’t have a large mining rig, or you’ve decided to mount a few of your mining GPUs directly to your motherboard, than you can buy a single PCI-e 16x to 1x powered riser adapter card. Just keep in mind it costs more – if you will need more in the future, just buy a 6 pack now and almost $5 per riser!

Check PriceMintcell is as close as you’ll get to a name-brand in the riser cable world. Their Amazon listing has a specific warning to make sure that you are buying directly from them, and not some ‘other’ supplier.

These riser kits are the perfect solution for setting up a crypto mining rig like Ethereum mining rigs.

There are 3 high quality capacitors on each riser for safe and reliable delivery of power to your GPU. The USB cable is 60cm long, and the SATA 15-pin connector has a molex plug on the GPU riser side, meaning you could use a molex power supply cable and bring power to the riser and GPU directly from your power supply unit, rather than having the power going through your mining motherboard (this is especially important when multiple GPUs are pulling high power and can cause your motherboard to burn out!). For my build, I am using GTX 1060 series cards that will be detuned to run as low noise/heat/power as possible so I will not be using as much power as some other GPUs would.