There are so many tactical pens hitting the market so it’s easy to get confused about which defense pen is the best one to buy. In this review we will cover in-depth the 1100 series Tactical Pen made by Benchmade. The pen is available in Titanium, Aluminum, and Damascus Steel.

Benchmade Knife Company is a USA company that started in California and later moved to Clackamas, Oregon. In 1996, to respond to growing customer demand, the company moved from a 15,000 sq ft shop to a custom built 144,000 sq ft shop in Oregon City where it still remains today. Except for a few Red Class products, all of their knives and pens are Made in the USA.

This pen isn’t just a pen – it’s been dubbed a ‘hardcore writing instrument’ that can stand up to the rigors of a rough job. Anything from being dropped in the mud, or from 30 feet up in the air, the Benchmade pen can survive it all. Simply rinse the pen off and keep on writing! With the Fisher Space pen cartridge, the pen can write when wet, on wet paper, and upside down which pretty makes it useful in every situation.

With some of the less-expensive self defense pens on the market, they are mostly a cheap pen that has writing features to allow it in places a self-defense weapon wouldn’t be allowed. But with the Benchmade 1100, it’s a high-class, highly durable writing tool made to last you a lifetime. The biggest problem is that, if you’re like me, there’s a risk you’ll lose the pen! 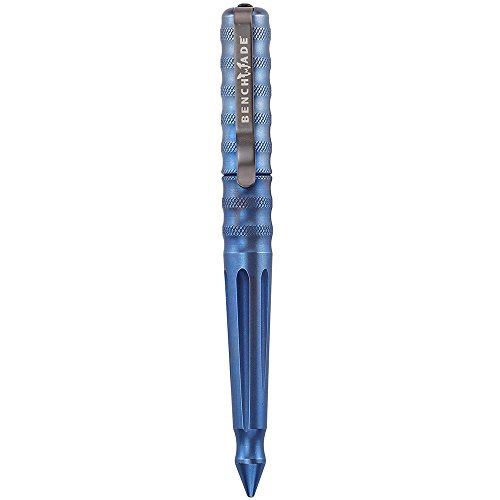 The pen is available at all dealers that carry Benchmade knives, as well as many online locations. On Amazon, there are a variety of different sellers - just be sure to buy from Amazon themselves, or a certified dealer. One poor review came from someone who may have purchased a knock-off pen because their pen was rusting in only 2 months (and aluminum and Stainless steel don't rust).

The 1100 series tactical pen from Benchmark Knives comes in a variety of materials and finishes. If you want a light-ish version, go for the aluminum. However, for a pen with shockingly good looks, consider the damasteel option – it’s a powder coated stainless steel in a blue tongue damascus pattern, and it’s particularly beautiful.

As a tactical pen, it has a flat end (the cap, which technically has 2 small screw heads, but at least no point) to brace your thumb on if you are trying to use it to stabby-stabby.

The pointed end of this self defence pen isn’t an actual point, it’s a slightly rounded point. While this may seem less aggressive, it will still do it’s job against an attacker, and it’s less threatening looking to the TSA agent rifling through your bags before you board an airplane.

It also comes with a pocket clip which, in our opinion, is essential for a self-defense pen so that it stays where you put it. If the pen didn’t come with a clip, you’d be digging through your pockets or purse while your attacker gets the upper hand.

What’s not to love?

Some buyers have complained about the cap not fitting snugly on the defense end of the pen while writing, but that could just be because the buyers aren’t pushing the cap on firmly enough. The cap definitely snaps over the writing end and stays closed, but when putting the cap on the back of the pen to write, there isn’t the same ‘snap’ into position.

Depending on your experience with the standard pen cartridge, you may want to upgrade to something different. The Fisher Space cartridge took some scribbling to get it running, but that also might not be a problem as long as you write with it regularly.

The business end of this combat pen isn’t coated with anything like carbide for glass breaking. However, it’s likely to still break glass if you really needed it to.

If you’re looking for a tactical pen you can wear to the CEO’s office and take to the construction site, this is a great option.

If you’re simply looking for an everyday carry defense pen, there are cheaper options we recommend.
Check out our round-up of Tactical Pens under $20