Tactical pens can be a useful self-defense tool, so they’re great to put into your bug-out bag or even just carry with you every day. The likeliness of using one is slim, but it never hurts to be prepared. Plus, just carrying one around makes me feel cool!

Since first writing this article 3 years ago, there are so many more budget tactical pens available right around the $10 mark. We try to keep this list updated, but even if these items are out of stock or unavailable, you can easily find comparable options by clicking on tactical pens in the article below.

What is a tactical pen?

Tactical pens got their start from the Kubotan – a self-defense key-chain weapon developed by Soke Takayuki Kubota (see Wikipedia article here). The popularity grew in the early 1970s when the Los Angeles Police Department began training female officers to use the device. However, a Kubotan can be considered an offensive weapon and is actually prohibited as a carry-on item for air travellers. Enter the tactical pen.

A tactical pen is a survival tool, and can be a deadly weapon in the right set of hands. Worst case scenario is that it’s simply a useful pen – and since it is really a pen, it’s allowed places a weapon wouldn’t be. We’ve heard stories of getting them past the TSA, simply because they are a carry-on writing utensil but of course, we don’t recommend it because TSA agents are mostly unpredictable sociopaths who “left normal jobs to put on costumes and abuse their fellow citizens daily”. Also, the TSA strictly forbids tactical pens that have a blade which is why we’ve chosen to leave bladed multi-tool pens out of this list.

Since tactical pens are made out of high grade metal, they are stronger and weigh more than a standard pen. This gives your punch more pack (or is it packs more punch?) simply by holding it in your hand while swinging. They’re also great for stabbing, jabbing, and generally inflicting pain on an attacker. 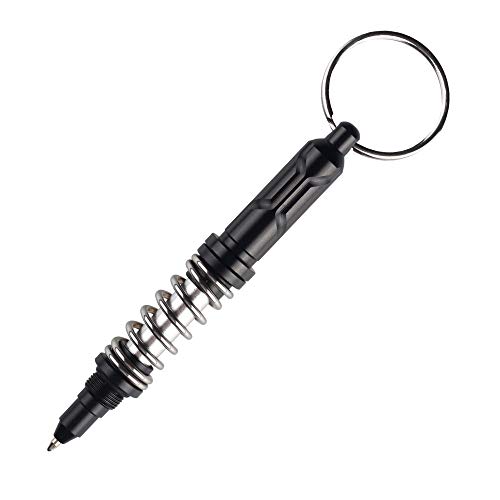 This tactical pen has all the features we wanted, and was impressively near the bottom of the chain price-wise. At the time of writing, the pen was $10.99 with free shipping.
Although it's a no-name brand tactical pen, it came with all of our must-have features including a twist-on cap, standard pen refill (with a refill included), no logos that give it away as some sort of angry self defense tool, and a large, flat area to place your thumb during overhand strikes.

Tactical Pen How to use it for self defense

Having a tactical pen does very little good if you don’t know how to use it! Here are some things to keep in mind.

Here’s a tactical pen self defense guide from Survival-Mastery.com

What to look for in a tactical pen

For some reason, there’s been a recent increase in the number of cheap tactical pen knock-offs. That’s fine, except for the main design flaw I see many of them have – they have points on both ends!!?!

Check out this video, and you’ll see what I mean. Effective use of a pen or any other self defense object is the ability to grip it firmly. If your tactical pen has a ball pen on one end and a glass breaking carbide tip on the other, how do you place your thumb over the end for better jabbing and stabbing strength? Hint: You can’t!

How to choose a tactical pen

Look for something in your price point that has the features you want, and then go for it! Here’s a list of the features we wanted, and that’s why all of the self defense pens made it to the list below.

Check PriceThis low price tactical pen brings new meaning to the saying “a day late and a dollar short” – that’s because this tactical pen is $1 away from being the best priced pen on our list! Even at $10.99 at the time of writing this, it’s well under the $20 limit of this roundup.

What I really like about this pen, aside from the great price and free shipping, is that it has a screw-on cap that stays put over the writing end of the pen. That means the business end, the hardened tungsten tip of the pen, is ready at a moments notice. Plus, the cap has a flat end – which we’ve said before – makes a great surface to put your thumb on when using the defense pen for overhand strikes.

If we had to find a downside, it would be that the drilled out sides of the pen make it look a little too tactical/EDC style to blend in at a business meeting.

Check PriceAgain, this is our top choice. For under $10 and free shipping (at the time this article was published), this pen has it all. It’s build out of high quality aviation aluminum. The pen is so light you’ll forget your carrying it (which maybe isn’t a good thing?) and yet strong enough to inflict injury or break a window in an emergency situation.

The other thing I really like about this pen is that it doesn’t have a big bold logo on it that makes it look like a weapon. Ideally, a combat pen should blend in and look like a normal pen, but with a big Smith & Wesson or other defense or aggressive style logo (think skulls or guns or sharp teeth – yep we’ve seen ’em all!).

It has the necessary flat top for bracing a thumb during tactical use, and it also has a twist on cap with a clip.

This was the only defense pen we saw that mentions it is water proof – I assume that means when the cap is screwed on, the pen body is an air-tight sealed cartridge.

Another big plus (that some of the more expensive pens didn’t have) is a lifetime warranty!

This tactical pen doesn’t seem to be available any longer.

When using the pen as a pen (strange to think about, but really, that’s the every day function of this tool), the cap doesn’t screw onto the back of the pen. Instead, it just presses on, but pops off easily unless you really push the cap on.

We can imagine that if you keep pushing the cap on the other end tightly it will start to leave a scratch and/or ridge in the body of the pen. One method would be to simply leave the cap clipped to your shirt pocket while you write with the pen.

Check PriceThis is a quality name-brand pen from a company with a reputation to uphold, so you know that you can expect a certain level of quality and craftsmanship! However, it is twice as much as our #1 choice which is why this one didn’t win.

We couldn’t justify buying one of these for the cost of 2 of the tactical police pens above. We’ll let you make your own decision though.

This pen comes protected by Hoffman Richter’s Ironclad Lifetime Warranty. It also features all of our desired features, including a blunt flat end for bracing your thumb against, as well as a a pocket clip that can be removed if desired.

The one place this defense pen falls short is that the cap is not a twist on, but simply a clip on. However, that does mean that it also pushes onto the other end snugly while writing. There are small o-rings to keep the cap tight, and possibly waterproof.

This combat pen does come with a name logo on it and it does look a little bit more like a tactical pen, so that could increase the likeliness of it being confiscated by the TSA. However, since the pen clips on both ends, I’d say clip the lid over the glass breaker point and it simply looks like a pen.

Check PriceThis pen goes a little bit beyond by also including an LED flashlight – but just because it has extra features, we didn’t want to exclude it from our list. What we aren’t quite sure of is how flat the flashlight tip is on this and if it could meet the requirement of having a blunt end to put your thumb against; at least it isn’t a glass breaking point like some other company’s pens.

The glass breaker cap screws off to reveal the pen tip, and it looks like the cap can be twisted over the flashlight for secure storage.

With a flashlight and a belt clip, this pen offers enough options to be a compelling choice in the military style combat pen market.

We also love that this pen comes with a refill and a gift box, all for less than $20! If you’re looking for a tactical pen light, this is the best pen on a budget.

Warning: No mention of a carbide tip on the glass breaker, so the business end may just be aircraft aluminum. That should be hard enough for at least one or two window breaks, but if you like to stab things you may find the tip will become dulled fairly quickly.

If your search for a self defense pen isn’t limited by budget, then keep reading. We limited the list above to pens under $20 because that was the main objective of this article. In reality, however, there are some well known companies producing tactical pens under $50 that have received the highest buyer ratings.

Here are some of our top tactical pen reviews:

Boker Treemade has been making knives for hundreds of years, and has now started making tactical pens. From solid aluminum to carbon fiber, the high built quality from this German company puts a high quality writing instrument and defense weapon into a beautiful package.

For the person who expects nothing less than the best pen, the Benchmade Tactical Pen is a wise decision.

Made of Damascus steel, it comes with a knurled handle and has a nice heavy feel in your hand. This pen isn't specifically listed as a glass break, but the slightly rounded off tip is sure to call less attention to itself than some of the pointier carbide glass breaker pens.

Durable, rugged, and backed by a name brand you can trust - all at only dollars more than the imported Asian pens.

The Hoffman Richter spy pen has a glass breaker, and is easy to use - it fits in your hand, and has a flat end for bracing your thumb on while stabbing. Wearing jeans or a suit, Hoffman Richter says this pen will blend in with your outfit.

Also of mention is that this self defense pen comes with a lifetime guarantee - an Ironclad Guarantee that promises satisfaction and quality for the life of the pen - more than we can say for some of the cheaper options!