Böker is a German knife manufacturing company that has recently branched out into tactical pens and other self defense products. The company dates back hundreds of year, during a politically restless era when 2 brothers decided to start producing sabres.

That was back in 1829. Hundreds of year later, after selling off the US portion of the company in 1961, Boker reacquired the rights to the American brand in 1986. Boker USA, Inc was then established in Denver, Colorado.

Boker has stood the test of time and their products too. That’s why we wanted to list some of Boker’s best tactical pens. 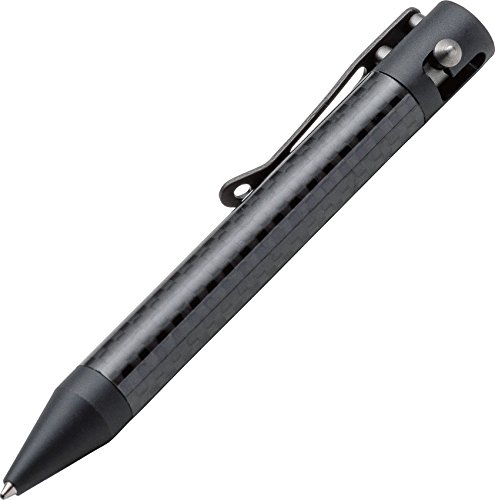 This pen is just cool! It has a carbon fiber body and titanium coated end caps. While it isn’t as aggressive as some other tactical pens, that’s part of the appeal. It’s covert – it simply looks like a high quality pen, and it’s strong. Plus, it has a cool ‘bolt lock’ style pen retraction system.

Check PricePlease note: Although this pen is listed as a carbon tactical pen, it’s not actually made of carbon fiber like some other Boker pens. It’s built out of a solid block of billet aluminum

Defense pens that cost less are great on the defense side, but do not fill-the-bill as a high quality writing utensil too – but this Boker pen does.

At 6 inches long and 32 millimeters in diameter, the tactical pen feels great in your hand as a writing instrument and with a weight of 2 oz you can feel the quality.

The body is solid aluminum with a knurled grip, and is built to take easy to find Fisher Space Pen refills.

This pen comes with a twist on cap that has a positive snap when pushed onto the back of the pen to keep the cap in place while writing. Plus, with a flat top, the cap doubles as a bracing location for your thumb to ensure maximum stabbing and jabbing power.

The spring clip is just another feature that makes this one of the best tactical pens for the money. While some say the clip is too strong, it really depends on the thickness of material the pocket is made out of.

The Boker PLUS comes with a limited lifetime warranty. When it arrives, the pen is nestled in velvet inside a keepsake gift box with the Boker label embossed on the top.

If you’re lucky, you’ll get this aluminum tactical pen on sale for less than $20 (which really means it should be at the top of Best Tactical Pens under $20 list).