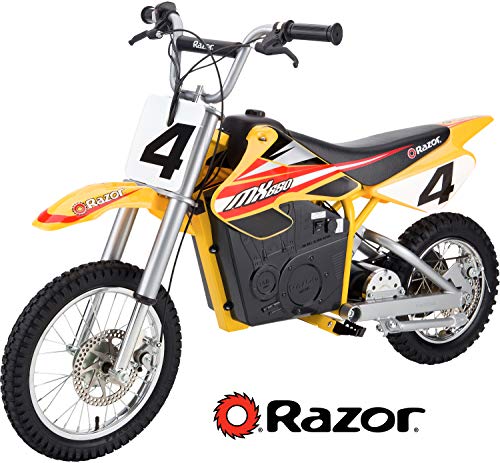 This bike is dubbed the ‘King of the Hill’ and can actually carry adults – however, it’s recommended for youth age 16 and older so it just makes it into our list of the best electric motorcycle for kids.

There’s no doubt about it, this MX650 is a big Razor dirt bike. What we like about it, however, is that the cost isn’t big.

Sure it’s more expensive than the MX350 or even the MX400, but it’s only about 50% more. For motor power, however, you get a 650 watt electric motor, rather than the 350 watt of the MX350, and your top speed is higher as well. What could really seal the deal for getting the biggest Razor dirt bike, however, is that the wheels, frame, and weight capacity are all larger – which, for an adult or teenager, makes riding it way more fun! Keep in mind that although it is the biggest of the Razor dirt bikes, it still is toy-sized. Check out this official video from Razor showing a teenager riding the MX650 dirt rocket.

Top Speed: The Razor MX650 top speed is 17 mph. Razor mentions that the speed may change depending on the weight of the rider, and the charge status of the battery, but doesn’t provide info on what weight of rider was used to determine the top speed. However, what we do know, is that the top speed of the MX350 dirt bike is 14 mph – so this is definitely faster.

Weight Capacity: The MX650 is the biggest razor dirt bike, with a weight capacity of 220 pounds! The MX350 is only rated at 140 pounds, making it unavailable to many adults and teenagers. The MX650 does weigh in at almost 100 pounds, more than the 62 pounds of it’s smaller brother, but it’s probably because of the extra strength needed for the higher weight capacity. Keep in mind that this still isn’t a full size motorcycle – if you’re tall, you might still feel like a bear in a circus.

Motor Power: Razor Dirt Bike’s are named after the size of their motor – usually at least! The MX650 has a 650 watt motor.

Battery: The Razor MX650 48v battery? For some reason, the battery is incorrectly listed as being 48v. Razor says it is a 36 volt battery pack coming from 3 – 12V sealed lead acid batteries. Razor adds the stipulation that the initial battery charge will take 12 hours, and the battery pack needs to be charged at least once per month, or the batteries may become damaged and no longer charge properly.

Brakes: Unlike the MX350 that only has a rear brake, the MX650 has a front and rear disk brake

Assembly: The MX 650 electric dirt bike comes in a big box in multiple pieces. While the assembly is fairly straightforward, and the needed tools come in the box, expect to spend a while putting it together. The handlebar needs to be clamped to the front fork, and the front wheel and axle assembly needs to be installed. After that, connect the charger and do your best to anxiously wait at least 12 hours to test drive your new toy!

What People Are Saying About the MX650

Doing a search for mx650 reviews online will provide you with lots of peoples honest opinions – sometimes too honest! The biggest problem seems to be complaints about battery life.

However, on the other end of the spectrum, check out this video from after 2 years of owning the MX 650 electric dirt bike. After 2 years of use, their biggest complaint is that the handle grips can pull off the ends of the handlebars easily, and they’ve had to adjust the brakes a few times!

In another review of the MX650, a 50 year old upgraded the rear sprocket for a slower top speed and more torque to handle his body weight and still be fun to ride.

In this YouTube video, the most popular electric dirt bikes for kids are pitted directly against each other – Razor mx650 vs MotoTec vs Rosso, and the Razor wins. It seems to be the best at handling a larger rider.

Overall, people are very pleased with the Razor 650 electric motorcycle!